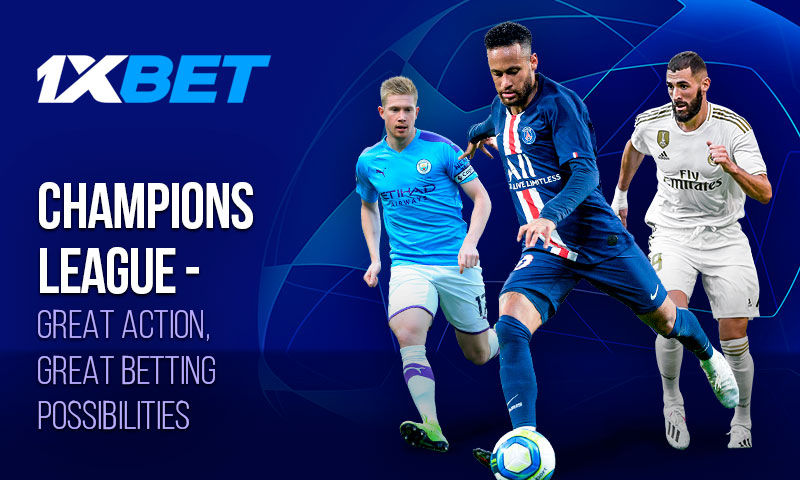 Bet on The Champions League Winner and much more at 1xBet

The 2020 Champions League has been anything but standard. The competition was interrupted at the beginning of March and is set to resume with a spectacular comeback in August. The remaining fixtures resume on the 7th of August and continue until the 23rd. You can watch the most influential European teams fight for supremacy and the trophy. With your 1xBet account, you also get outstanding odds and diversified betting markets that contribute towards making a profit from betting on your favourite club team.

Bet on the Champions League Winner

From all the long-term bets with attractive odds for the Champions League at 1xBet, the most appealing is predicting the outright winner of the competition. After the Round of 16 results, one can already get a good idea of who stands a chance of winning the coveted trophy.

Manchester City and Bayern Munich are currently favourites to win the cup. 1xBet provides odds of 4 for either team to win the European club competition. Manchester City has put in some outstanding performances on the field since the resumption of the Premier League. The team resisted a Real Madrid onslaught to win the Round of 16 first leg 2 - 1. That makes them favourites to eliminate Real Madrid in the second phase and make massive strides towards Champions League victory.

Bayern Munich is in an even better position in The Bundesliga without losing a single game since play resumed, picking up the scalps of Borussia Dortmund, Schalke and Leverkusen on the way. The new team Bayern has been playing exceptionally; nevertheless, The Champions League is an entirely different kettle of fish with very different matches.

PSG has come tantalisingly close to winning the trophy on numerous occasions, and 2020 just might the team’s successful year. The form PSG is experiencing in the Champions League as well as domestically is impressive, which makes them the next favourite to win. The owners have invested heavily in the best players to challenge for victory seriously, and that massive investment might finally pay off this year. Players like Neymar, Mbappe, and Icardi can change a game in an instant to break the spell. If you believe they can do it, 1xBet is offering incredible odds of 5,5.

Messi and Barcelona will fight tooth and nail to snatch their first victory since 2015. The Catalans are incredibly motivated to crush the opposition and win the competition. A 1 - 1 away draw to highly rated Napoli in the first leg of Round of 16 puts them in pole position to advance to the quarter-finals and go on to claim Champions League glory! 1xBet is FC Barcelona’s official betting partner which means you can enjoy exclusive odds of 8 on the team winning the competition outright this year.